Cookbook Crusher: Cooking For One: Now You're Cookin' 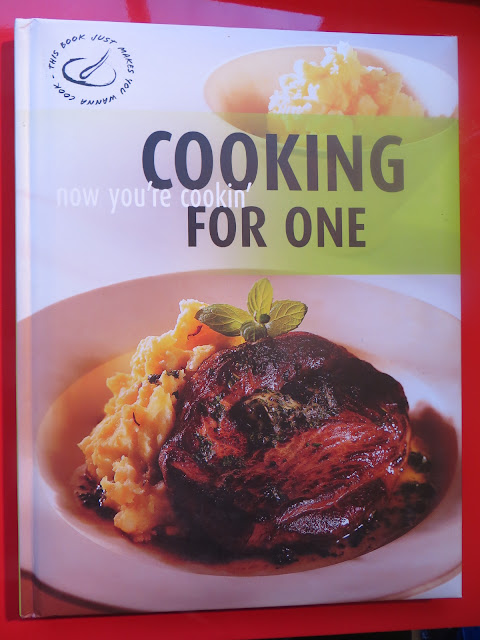 I'm a sucker for the bargain bin cookbooks at Chapters - there's usually a bunch of them for a dollar or two, and it always makes me wonder why they're there. Is it just overstocked? Is there something wrong with the cookbook? For a dollar, it's worth the gamble. (This one only costs a penny on Amazon these days.)

I picked up Cooking For One: Now You're Cookin' at a Chapters in Toronto from the bargain bin, thinking that since I live by myself, I would get some use for it. In all the years I've owned it, I've never even opened it, so now it's time to give it a go.

At first glance the book is filled with single-serving recipes, normal dishes cut down in size for one person. There's a mix of salads, entrees, and a few desserts, but no real overarching theme apart from portion size - though they seem to go heavy on the seafood dishes.

The pictures seem a bit weird to me - the book was published in 2007 but the pictures seem a lot older than that. Looking in the inner flap gives a hint to why this is - this cookbook was initially published in 1998...in the Netherlands. However, the credit for all the recipes is a German company. So it seems like this book was originally published over 15 years ago in either German or Dutch, and was more recently translated into English. One more oddity is that the printed price is only in British Pounds, but the recipes use American weights and measures.

The recipes look generally pretty straightforward, some to the point of being insultingly easy. Their bocconcini salad recipe is essentially just "layer tomatoes, basil, bocconcini, top with olive oil and pepper" - that is definitely a bocconcini salad, but does that need a whole page recipe?

They also have a weird focus with microwave cooking - both in terms of cooking raw meat in the microwave, and a rice recipe that wants you to cook the rice for 35 fucking minutes  in the microwave (edit: I looked and they want you to cook beans for one hour in a microwave too). Cooking rice, even a small portion, seems like it could be accomplished on the stovetop a lot more quickly and with less chance of an explosion of ceramic and second degree rice burns.