So, I've now tried five recipes from Food & Wine Magazine's 1997 Quick from Scratch Chicken, Turkey & Cornish Hens cookbook. I tried to cook them as close to possible to the recipes, so here's the outcome. 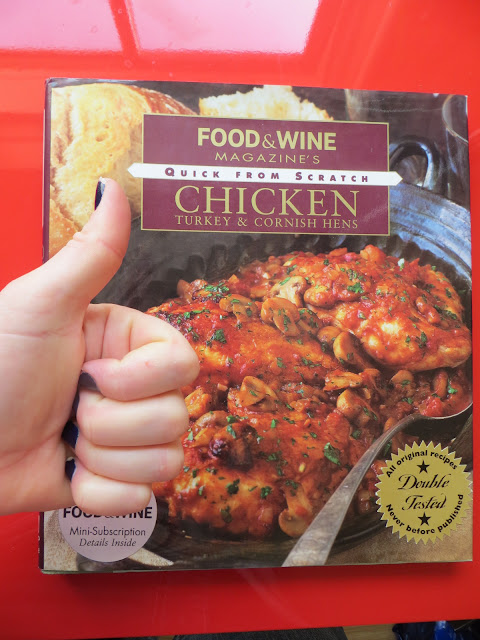 Thumbs up, but still going to the used book store. The recipes generally turned out pretty well - you can tell they were definitely created by professionals and tested in a kitchen. There were some tweaks I would have made if I could - using softened butter in the Russian-Style Chicken Cutlets, and a lot more spice in the Spicy Chicken Chili and the Vietnamese Chicken Salad. I'm glad I did the not-quite substitute of using spicy turkey sausage in the Kale and Potato Soup with Turkey Sausage. Largely the lack of spice comes from the age and era of this book - people were starting to get into these flavours, but the general public didn't have as much spice tolerance (they still generally don't here in Canada). The only recipe that really didn't work out was the Cornish Hens with Scallion Butter and Lime, but that was partly my fault for not realizing my new oven was tiny. But generally yeah, these are good solid recipes that can be tweaked and adjusted to your liking and it's a solid cookbook.

So why is it going to the used book store? Mainly because Food & Wine Magazine has uploaded all these recipes to their website, and they're identical down to the blurb at the top and the wine pairings (compare the Russian-Style Chicken Cutlets page). I also tend to not eat a lot of chicken, mainly because it's so dramatically expensive in Canada and because being originally from Alberta, beef is my go-to meat. Turkey is reasonably hard to find outside of Thanksgiving (I just couldn't find turkey cutlets) and for all the hassle of cornish hens, it's probably easier to just roast a chicken.
Posted by Kate D at 16:38