So, I've now tried five new recipes from Classic Indian Vegetarian and Grain Cooking. I tried to cook them as close to possible to the recipes, so here's the outcome. 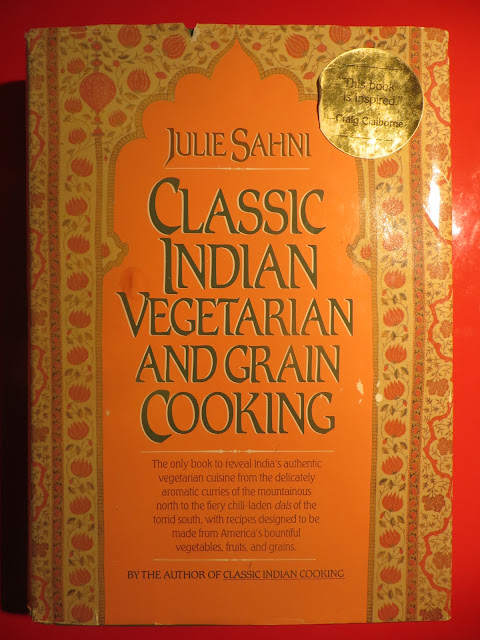 A keeper! This is a pretty awesome cookbook - while some of the recipes have been adjusted slightly for a North American kitchen, it's full of authentic Indian dishes and flavours, including ones that don't normally get served as "Indian food" in Canada. I'm definitely going to keep this one - I particularly want to explore more of the Indian breakfasts and desserts.

I tried to go for a big spread of recipes - the sabzi korma was the closest to what we'd call a "curry", though the spicing was a bit new and different to me. Despite this cookbook being from the 80s and written for North American, they hadn't toned down the heat levels - the mint and onion relish was gloriously, brutally spicy. The dalia and papaya lassi turned out well and the biggest surprise was how successful the corn starch and radish roti was - it just didn't sound like it was going to work, but it did.

The only issue I really had with this cookbook was that at times the instructions are a bit vague, especially when you're trying to follow the recipe exactly. There were a few points where seasoning or garnishes are mentioned in the ingredient list but not in the instructions, but nothing was so awry that it messed up a recipe. There were times where the instructions looked like they would be wrong, such as with the roti, but I'm glad I stuck with it exactly because it did work in the end.
Posted by Kate D at 10:35